BEIJING — With President Donald Trump pledging to scrap or renegotiate trade deals as part of his “America First” strategy, the door has been left open for China to push ahead with its own agreements. And nowhere are those efforts more apparent than in Washington’s own backyard: Latin America.

President Xi Jinping, who will be meeting Trump for the first time in Florida on Thursday, has already made three trips to the region since early 2013 — and business is booming.

While trade between the U.S. and Latin America has doubled since 2000, China’s trade with the region has multiplied 22 times, according to OECD economist Angel Melguzio. In fact, Beijing is now the biggest trading partner for the major economies of Brazil, Chile and Peru — and Argentina, El Salvador and Guatemala are well-placed to profit from China’s booming demand for global food.

The U.S. remains Latin America’s biggest trading partner, but with Trump vowing to dismantle the North American Free Trade Agreement (NAFTA) and build a wall on the Mexico border, China could hold the advantage.

“China stands to supplant the United States in economic and political influence over time,” Gustavo Arnavat, a senior adviser at the Center for Strategic and International Studies (CSIS), told NBC News. “My assumption is that their influence will be even more significant in another decade.”

Read the full story on NBCNews. 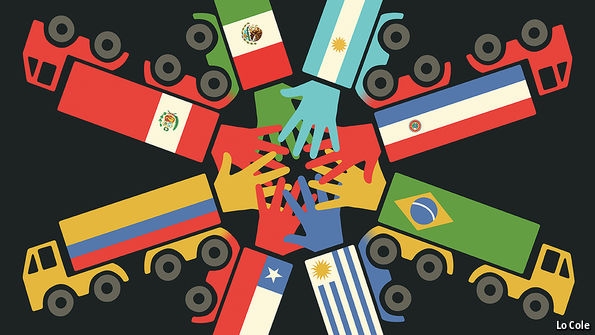 If you have been following your newsfeed over the past year, you might be forgiven for believing that Latin America is a wreck. Venezuela has descended into a socialist nightmare. Zika spreads across Central America and South America. Cartel violence ravages Mexico. To the casual observer, it must seem like things couldn’t get any worse.

If you look past the headlines and into the data, the surprising truth emerges: In many respects, times have never been better for Latin America. Since the early 1990s, many of the civil wars and internal conflicts that plagued the region for decades have come to a close. Unprecedented peace has developed alongside a growing interest in economic liberalization: reforms in countries like Peru, Colombia and Panama have pulled millions of Latin Americans out of poverty. A new trade bloc stretching from Chile to Mexico—the Pacific Alliance—has united much of the region in the pursuit of free trade and free movement. Where functioning democracies were once a rare sight in the region, stable democracies and strong civil liberties are increasingly the norm in Latin America.

Read the full story on Forbes

With Rio de Janeiro hosting the 2016 Summer Olympics, AS/COA Online takes a look at Latin America’s presence in the mega event, as well as how the region has scored through Olympic history

Spanish banks have cause to remember with gratitude how, during the choppy years of Europe’s financial crisis, it was profits from subsidiaries in Latin America that helped keep them afloat.

So today, as retail banks across Latam face an economic storm of rising risk and cash-strapped account holders, Spanish banks appear ready to increase their commitment to a region that recently threw them a lifeline and with which they have historic ties.

But big US and UK banks, which only recently had big ambitions for Latam, are responding to the region’s economic travails by heading for the exits, triggering a bout of dealmaking.
Santander, the biggest Spanish bank by assets, is eyeing up the Latam retail operations of New York’s Citigroup. In February, Citi said it would offload retail banking and credit card operations in Argentina, Brazil and Colombia, valued at about $6bn.
It follows Citi’s agreed sales of its operations in Peru, Panama and Costa Rica to Scotiabank of Canada, and of those in El Salvador, Guatemala and Nicaragua to local institutions.

Read the full story on FT.com

Activity at China’s factories shrank for the 14th straight month in April as demand stagnated, a private survey showed. China is a major buyer of Latin America’s raw materials, from oil to Brazilian iron ore and Chilean copper.

Losses in the Brazilian real were intensified by ongoing central bank intervention. The bank offered reverse swaps for a third consecutive day on Tuesday as part of its broader efforts to curb currency gains.

“All emerging currencies are weakening today. The central bank (intervention) is just the icing on the cake,” said Pedro Tuesta, an economist with research firm 4Cast.

Tuesday’s drop in Latin American markets contrasted with a strong first quarter, in which equities and currencies gained steadily on signs of renewed central bank efforts in the United States, Japan and Europe to boost economic growth.

See the full article on Reuters.

GE has announced that Rogerio Mendonça will be the President and CEO of GE Oil & Gas Latin America. Effective May 1, he will be responsible for driving business results in the region, deepening the relationship with customers, advancing local capabilities and leading the 4,500 employees.

Rogerio joined GE in 2000 and held different positions in commercial, sales, services and business operations. In 2013 he was appointed President of GE Transportation in Latin America with responsibilities for all the operation, leading the team to record levels of operational excellence and financial results; through a solid growth plan including product localization, new product development and introduction, long term alliances and strategic service deals.

Prior to GE, Rogerio worked for AB-Inbev leading the commercial operations of the food and beverages company in Brazil. He holds a bachelor degree in economics and international trade, from the Federal University of Minas Gerais, Brazil, also a postgrad in Marketing from Berkeley, California University – USA

“With the discovery of the pre-salt reservoirs in Brazil, the opening of the Mexican market to new players as part of the Energy Reform, the largest oil reserves in the world in Venezuela, the new deep water discoveries in Colombia and some of the largest unconventional resources in the world in Argentina, Latin America is a region with growing importance to GE as our customers are looking for the best minds and machines to optimize their operations, and we are leveraging our diverse offering and digital expertise; which we believe is the key to unlocking that opportunity,” said Rogerio Mendonça.

MIAMI, April 26, 2016 /PRNewswire/ — The number of billionaires in the region dropped dramatically to 69 in April, from the 100 names in the previous year. The fall is a testament to the magnitude of the Latin American economic slowdown, brought about by lower commodity prices, slower growth in China, and by localized issues such as Brazil’s political crisis.

The biggest fortunes were hit hard. Case in point is Mexico’s Carlos Slim, with an estimated fortune of $50 billion, down 35%, from the $77.1 billion last year.

Another example from Mexico is Ricardo Salinas Pliego, founder and chairman of Grupo Salinas (TV Azteca, Elektra, Banco Azteca) who saw his wealth fall almost by half from $8.2 billion last year, down to $4.3 billion this year.

In Brazil, one of the biggest drops was for the Marinho family (Rede Globo) -Joao Roberto Marinho, Jose Roberto Marinho and Roberto Irineu Marinho- with a 47.5 percent plummet in their fortune, from $8.2 billion in 2015 to $4.3 billion this year.

But there were others who, despite the difficulties in the region, managed to increase their fortunes. For example, the fortune of Jorge Moll Filho, the founder of the biggest hospital chain in Brazil, shot up 88%. Joining him with one of the top growth rates is Mexico’s David Peñaloza Alanis, chairman and CEO of infrastructure construction company Pinfra, with a 25% growth in his fortune.

To view the whole list and see how each billionaire’s fortune changed, visit: http://latintrade.com/top-billionaires-in-latin-america-down-to-69-names-from-100/

Latin Trade is a leading provider of information and business services to companies operating in Latin America. It publishes award-winning content in Spanish and English for distribution throughout Latin America, the Caribbean and the United States through print and online media. Latin Trade publishes Latin Trade magazine and Latintrade.com.

“Every country gets the leaders it deserves,” the French counter-revolutionary Joseph de Maistre quipped. He was wrong. The countries of Latin America did not deserve the blustering demagogues and iron-fisted generals who, until recently, often occupied the seats of government.

A look at Venezuela or Nicaragua reminds us that the demagogues and the populists are not yet gone. But a new kind of leader – moderate, intellectually humble, and prone to gradualism – has been in ascendance since the 1990s. This is the kind of leadership Latin America does indeed deserve.

Read the full opinion by Andrés Velasco on Project Syndicate.